Millions of people in Ethiopia require “immediate life-saving intervention” after a severe drought and major flash floods have devastated livestock and crops, the United Nations has warned.

At least 7.8 million people have been receiving emergency food aid since April, up from 5.6 million at the start of the year, but a further 700,000 people in the country’s Somali region did not receive supplies “due to resource constraints” and they are now feared to be on the brink of starvation.

Oxfam warned that the international community – currently preoccupied with other issues such as Isis, Donald Trump and North Korea – must act urgently to prevent the crisis from turning into a “catastrophe”.

In a report, written with the Ethiopian government, the UN’s Office for the Coordination of Humanitarian Affairs (OCHA) warned of “deepening levels of malnutrition and critical water shortages in the drought-affected areas”.

Some 228 districts, more than half the country, are now classed as “hotspot priority one” areas where people will die without help.

“The number of districts requiring immediate life-saving intervention increased to levels not seen since the height of the El Niño drought impacts in 2016,” the report said, referring to the natural weather system that increased the world’s average temperature last year, exacerbating the situation in Ethiopia.

“The 19 per cent increase in priority one districts is largely due to the deepening drought conditions, which continue to deplete water and pasture sources, significantly impacting livestock body condition and milk production. 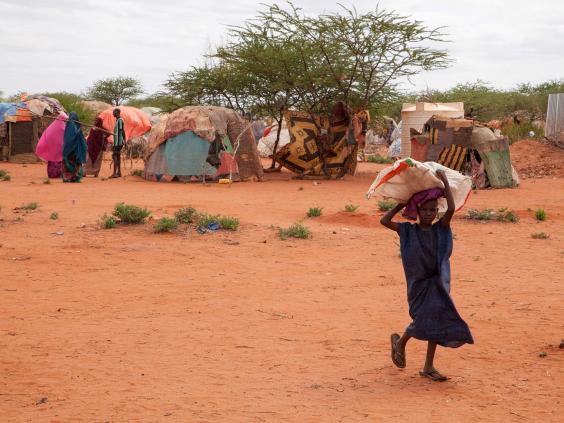 “Milk is the main source of food and income for the majority of households in the drought-affected areas.”

About two million animals have died in the Somali region alone, according to the UN’s Food and Agriculture Organisation (FAO).

But, as some areas suffer from drought, others are experiencing severe flooding.

“In Oromia region, four incidents of flash floods were reported in Adama, Arsi and East Shewa zones in the second week of July, destroying more than 50 houses and more than 800 hectares of fruit and vegetable crops,” the report said.

“In Afar region, a flooding incident on 20 July has affected 204 households and damaged one school and health centre in Megale [district].”

The report warned a total of more than 1.5 million people were expected to be affected by flooding this summer with 500,000 likely to be forced to leave their homes.

There is also an ongoing outbreak of acute watery diarrhoea in six regions.

So far the international community has committed $382m towards an appeal for $948m of aid sought in January this year.

“All humanitarian partners, including donors and recipient agencies, are encouraged to inform OCHA Ethiopia of cash and in-kind contributions,” the report said.

Abdoul Karim Bah, the FAO’s deputy representative in Ethiopia, told the Thomson Reuters Foundation that it was “crucial” to provide aid between now and October when the rains are due to come.

“If we don’t act now, hunger and malnutrition will only get worse among (herding) communities,” he said.

And Manish Kumar, Oxfam’s humanitarian programme manager in Ethiopia, told The Independent in a statement that “yet another poor rainy season has pushed 700,000 more people to the verge of starvation in southern Ethiopia”.