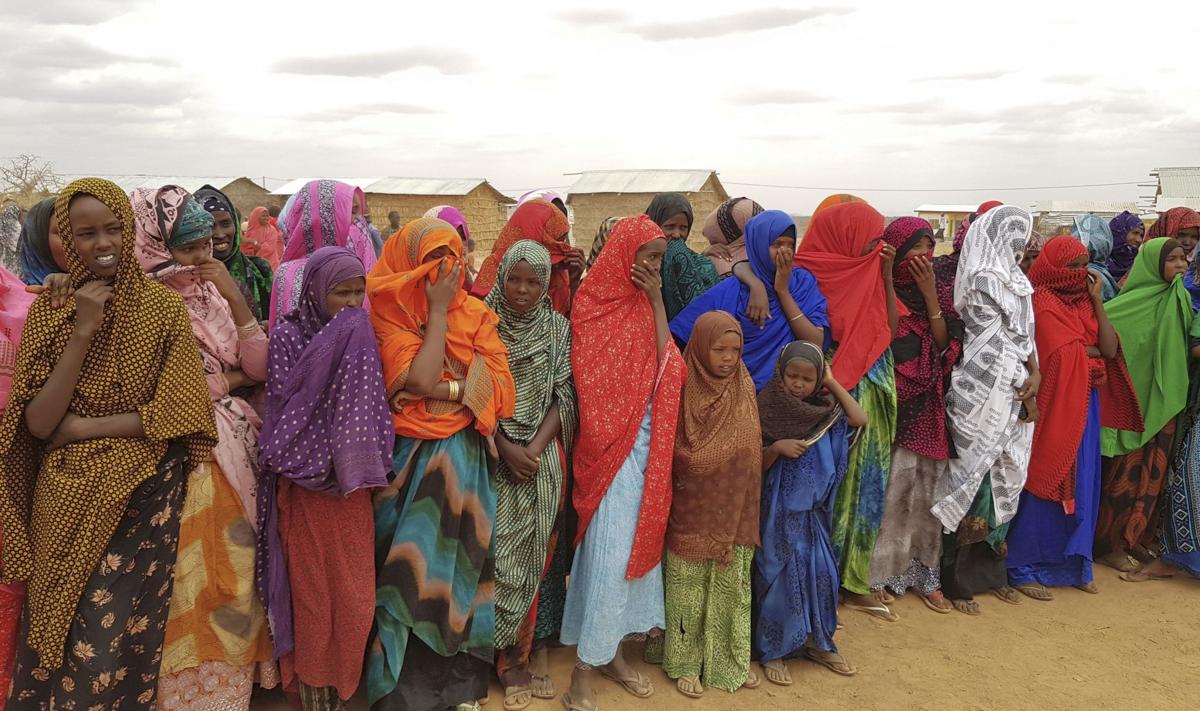 Ethiopian women wait in line to receive food aid due to drought conditions in the Danan district of the Somali region of Ethiopia, which hasn’t seen significant amounts of rain in the past three years. — AP Photos/Elias Meseret

Lands that were previously damaged by drought are seen after their recovery due to intensive water and land conservation efforts, at the Adi Felesti irrigation project in the northern Tigray region of Ethiopia.
DANAN, Ethiopia — Men, women and children in this remote region of Ethiopia scramble to receive food aid and feed their rail-thin cattle as a huge cloud of dust rises into a sky that hasn’t delivered enough rain for the past three years.

The mass feeding program, managed by aid groups in this sun-scorched district, is the last attempt to save the lives of humans and animals until the rains hopefully materialize in mid-September.

More than eight million people in drought-hit southeastern and southern Ethiopia are in need of emergency food assistance, officials said as the heads of the World Food Program, Food and Agriculture Organization and International Fund for Agricultural Development made a rare joint visit over the weekend.

Despite economic growth in the past decade that has made Ethiopia one of Africa’s fastest-developing countries, rural areas are suffering as the nation faces its worst drought in years. This barren district called Danan, populated mostly by ethnic Somalis, has been historically neglected and is home to a rebel movement that seeks secession.

“This particular year is more intense due to the fact that it’s the third or fourth year that the drought repeats itself in this region,” Jose Graziano da Silva, director-general of the Food and Agriculture Organization, told The Associated Press. “In Africa, Ethiopia was best-prepared to face the impacts of climate change. But after having three successive years of El Nino, the country is unable to deal with it alone.”

The situation has been overshadowed by drought in neighboring Somalia and the famine that was briefly declared earlier this year in parts of neighboring South Sudan, aid workers say. Over 27 million people in East Africa are in need of food assistance, largely because of drought, according to FAO.

“The aid we are receiving is not enough to feed ourselves and our animals,” a local chief, Sheikh Hussein Mohammed, told the delegation. “Besides, the food that is being delivered to us is not what we are used to eating. And worst of all, the animals aren’t providing us any milk and meat. We are really hungry. And we are suffering.”

Another local chief, Sheikh Ibrahim Mohamed, said he has lost half of his cattle in the past two years.

“The youth are leaving the area to other towns and villages nearby, but I’ve nowhere to go,” the 62-year-old said. “I can’t abandon my family and my remaining cattle and flee this area. I will die here.”

While no official death tolls are available, regional officials say half of Danan district’s estimated 280,000 cattle have died, a serious blow to the seminomadic population that relies on the animals for food, transport and income. Aid groups say an additional 2.2 million households require livestock-related assistance until the end of the year.

Ethiopia’s government says it has invested more than $400 million in the humanitarian relief effort, and aid groups say the government is now beyond its capacity to deal with the drought alone.

The United States last week announced $91 million in additional aid as the new head of the U.S. Agency for International Development, Mark Green, visited the country as part of his first overseas trip.

“During my visit to the Somali region, which is experiencing near famine-like conditions, I saw the dire need for food assistance,” Green told reporters.

The weekend visit by the heads of WFP, FAO and IFAD also was aimed at addressing the root causes of the drought and improving communities’ abilities to prepare for future shocks.

“We’ve got to scale up and stop working on a project-based approach,” said Gilbert Houngbo, the director of International Fund for Agricultural Development as the delegation visited Ethiopia’s Tigray region, which has been praised for its land and water conservation. “We cannot do business as usual.”

The northern Tigray region once was one of Ethiopia’s most environmentally degraded areas after some 3,000 years of human settlement. It still faces droughts but has built resilience over the years through conservation efforts, and humanitarian aid now focuses less on the kind of emergency response seen in Danan district and elsewhere.

“Twenty years ago, it was impossible to grow crops and divert rivers in this area because the land was in a really bad shape,” said Atinkut Mezgebu, head of the region’s agriculture and rural development bureau, as the delegation visited an irrigation project. Its lush greenery was a shocking contrast to Danan district’s bleak sand and gray. “But through an intensive conservation work, we have now several hundred hectares of land that is covered with crops and forests.

“This should be emulated in the rest of the country if a lasting solution is needed.” — (AP)

Ethiopia faces worst drought in years as millions at risk
Agriculture on the Ethiopian Plateau April 3, 2017